Kampong Thom is located 162km north of Phnom Penh Capital along National Road No 6 to Siem Reap Province. It is one of the five province surrounding Tonle Sap Lake and the second largest province in the country. Kampong Thom is home to some of Cambodia's most splendid cultural and natural heritage. Coming to this province, tourists will have opportunity not only to explore Cambodia's civilization through temples and historical sites but also contemplate beautiful landscape in the province. 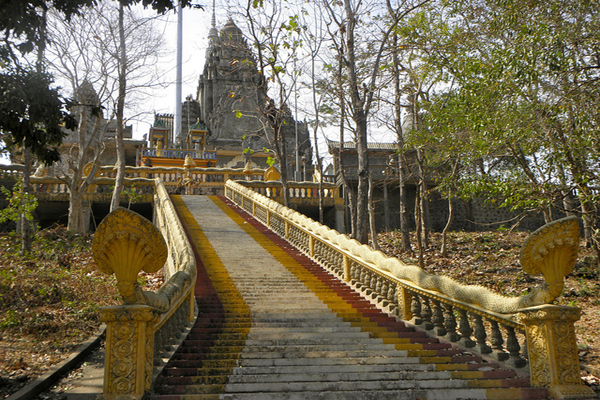 The previous name of the province was Kampong Pous Thom (Port/City of the Great Snakes). According to local legend, at a lakeside dock near the Sen River, a pair of large snakes inhabited a nearby cave. On every Buddhist holiday, the snakes would make appearances to the people nearby who then began to refer to the area as Kampong Pous Thom. Eventually the snakes disappeared and the name was shortened to Kampong Thom. During the Colonial Cambodia period, the French divided Cambodian territory into provinces and named most of them according to the local popular names for the respective areas.
Kampong Thom was a powerful capital in Southeast Asia during the Funan period. Prasat Sambor Prei Kuk, dating from the Chenla Era, is in Kampong Thom Province.

- Bus: The province has a very basic road network, which links Phnom Penh (165km) and Siem Reap (150km) with the National Highway No 6, and the separate National Road 64 to Preah Vihear province with a distance of 126 km. After a rebuild of the former dust road that was long overdue, this is now one of the best roads in the Country.

- Taxi: Taxi is always available in the province and help you to get the destination you want. In case you want to save money, you may take on of the share taxis, mostly leaving near the central market.

- Prasat Kuhak Nokor: is located in Trodork Poung Village, Pong Ror Commune, Baray District, Kampong Thom Province and is in the complex of Wat Kuhak Nokor (Buddhist Pagoda). To reach there, passenger can take all kinds of vehicle on National Road 6, then turn west through the gate of Kuhak Nokor pagoda in a distance of 2km. It is 79km from Provincial Town of Kampong Thom. These sanctuaries were built on the flat ground, on a square terrace made of laterite and sandstone facing to the East with the rampart surrounding. This rampart has a 35m-length (East to West) and a 25m-width (North to South). There is surrounding rampart of one meter height and 0.8 meter thick with two gateways: Eastern gateway is 9m height divided into 3 rooms, and western gateway is small and has square shape.

- Prasat Kok Rokar (Preah Theat): Prasat Kok Rokar is located in Rokar Phum, Srayov Commune, Stung Sen District. The temple was built of sandstone and laterite in Khleng style at the end of 11th century during the reign of king Suryavarman I to dedicate to Siva. The central part has conical shape to the east. Around the temple are a lot of multi-shape granite pillars that make it be impressed on the visitors.

- Sambo Prey Kuk: Sambo Preykuk is a cultural and historical site located in Sambo village, Prasat Sambo district, about 25 kilometers northeast of Kampong Thom provincial town. The site was once an old capital named Isanapura and a religious center for the worship of Shiva Brahmanism. Many temples were built in Sambo Preykuk during the reign of King Isanavarman I (AD 616- 635) in the 7th century. The temples of Sambo Preykuk constructed of solid brick, laterite and sandstone and decorated by bas-reliefs. The lintel, pillars and the door frames are all made of sandstone. So far, 140 temples have been discovered in the forest.

- Prey Pros: The Prey Pros, Kampong Thom is a man-made resort located at Prey Priel village. The area covered by the place is massive and offers loads for the tourists to enjoy. The resort has played host to various races making the time spent at the place an exciting one for the travelers. It also has been the venue for running race, bicycle race and other games.