Sambo Preykuk is a cultural and historical site located in Sambo village, Sambo commune, Prasat Sambo district, about 25 kilometers northeast of Kampong Thom provincial town. The site was once an old capital named Isanapura and a religious center for the worship of Shiva Brahmanism. 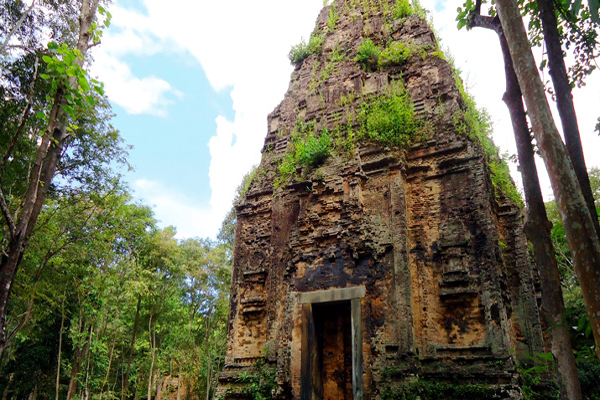 Located on the Eastern bank of the Tonle Sap lake, close to the Sen River, the central part of Sambor Prei Kuk is divided into three main groups. Each group has a square layout surrounded by a brick wall. The structures of the overall archaeological area were constructed at variable times: the southern and north groups (7th century) by Isanavarman I, who is considered a possible founder of the city and the central group (later date).

Sambo Preykuk is a cultural and historical site located in Sambo village, Sambo commune, Prasat Sambo district, about 25 kilometers northeast of Kampong Thom provincial town. The site was once an old capital named Isanapura and a religious center for the worship of Shiva Brahmanism.

Many temples were built in Sambo Preykuk during the reign of King Isanavarman I (AD 616- 635) in the 7th century. The temples of Sambo Preykuk constructed of solid brick, laterite and sandstone and decorated by bas-reliefs. The lintel, pillars and the door frames are all made of sandstone. So far, 140 temples have been discovered in the forest. Sambor Prei Kuk, located near Kompong Thom, 150km south-east of Siem Reap, lies off the main road towards Cambodia’s capital Phnom Penh.

Kompong Thom is a sleepy little town. The only hive of activity was the market place next to the Stung Sen River where we bought some brown palm sugar and Cambodian fragrant rice. The local taxi was actually an open-air wooden cart pulled by an antiquated motorbike. Its owner was an elderly man wearing spectacles with thick lenses. The journey to Sambor Prei Kuk was interesting in itself. We saw no other vehicles other than a lone villager cycling into town, his bicycle laden with hand-made straw baskets. Our van kicked up thick red dust as we sped on the laterite road. A woman scrubbing her clothes nearby was oblivious to the dust that swept over her.

Lest you entertain images of grand temple ruins akin to the grandeur of the awesome Angkor Wat, you’d be disappointed. Sambor Prei Kuk is a group of ancient temple ruins scattered within a shady forest. Originally called Isanapura, it pre-dates Angkor Wat and was the capital city during the reign of King Isana Varman 1, the son of King Citrasena.

Few tourists know of it. The only horde here was a group of Cambodian kids who rushed to our bus, hawking brightly-coloured homespun scarves at US$1(RM3.50) each. Built at the end of the 6th century, the ruins are touted to be some of the oldest structures in the country, covering an area of 5sq km.

About 100 small temples are scattered throughout the forest. Left in the open and not maintained, some of the structures are just mere remnants of their original building ? perhaps a broken wall here, a vine-choked edifice there. There are 52 temples in recognisable condition, and another 52 sites where the original structures are now buried in the ground, visible only as small hills.

All is not lost. The Ministry of Culture and Fine Arts together with the Waseda University, supported by The Foundation for Cultural Heritage and the Sumitomo Fund have started the Sambor Prei Kuk Conservation Project to restore these ruins.

The main temple group known as Prasat Sambor is dedicated to Gambhireshvara, one of Shiva?s many forms. Some of the towers still retain their carvings. Many are mere ruins now covered by vegetation.

As we walked further, enjoying the cool serenity of the shady trees, the small group of child peddlers had grown to 20. The original band selling scarves had been joined by older children hawking bracelets and trinkets. They were very persistent, dropping their prices to almost a quarter of the original as we neared the end of our visit. Sambor Prei Kuk does not match the splendour of Angkor Wat. Yet its serene forests and solitude make a much welcome change from the human masses of its famous cousin. Wat Kampong ThomWat Kampong Thom, also known as Wat Indrisamavora, is located in Kdei village, Preykahu commune, Stung Sen district, about 1 kilometer from the provincial town. This old temple is a holy place that covers 2,053 square meters. Statues related to the Buddha story can be found in the pagoda. The pagoda fences are painted in many different colors and styles. The pagoda offers a cool place for visitors to relax, especially during festivals.