Angkor Thom was the last and most enduring capital city of the Khmer empire. It was established in the late twelfth century by King Jayavarman VII. It covers an area of 9 sq km, within which are located several monuments from earlier eras as well as those established by Jayavarman and his successors. At the centre of the city is Jayavarman's state temple, the Bayon, with the other major sites clustered around the Victory Square immediately to the north.

Angkor Thom is 2.25 km from Tonle Sap lake, its southern gate is 7.2 km to the north from Siem Reap and it is 1.7 km to the entrance of Angkor Wat. All ramparts are built by laterite, 8m in height, 3 km in length and surrounded by moats. Each direction (east, west, north, south) has a gate, every way leads to Bayon temple, the city center. The last temple built in Angkor Thom is Mangalartha, in 1295.

In every corner is a Prasat Chrung by sandstone. This temple is rectangle in shape with a central tower faces east. In the Angkor Thom area, except for Bayon, all relics located in the western or eastern of Victory Square. 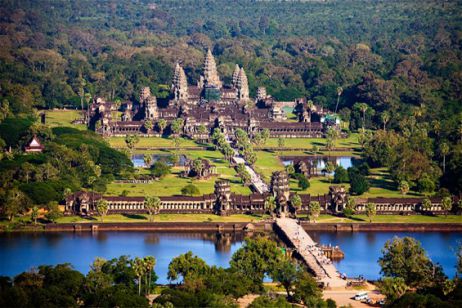