Things to do in Bangkok

Bangkok began as a small trading centre and port community on the west bank of the Chao Phraya River some 200 years ago. Today, while the city is up to speed with modern times, the grandeur and glory of its illustrious past still prevails. Be it dazzling temples, spectacular palaces, a world-famous floating market or colourful Chinatown, each of these famous places has an intriguing story to tell.

Located in Na Phra Lan road, The Grand Palace was a Thai royal residence constructed in 1782, the complex contains majestic buildings, pavilions and courtyards, some of which are open to the public. The sacred Emerald Buddha is housed in the grounds of the Grand Palace. The temple is considered to be one of the most important in Bangkok and the destination of many pilgrimages. Further attractions in The Grand Palace include the Museum of the Emerald Buddha, Dusit Maha Prasat Throne Hall and the Pavilion of Regalia, Royal Decorations and Coins.
The admission is 500 baht including some other places nearby. 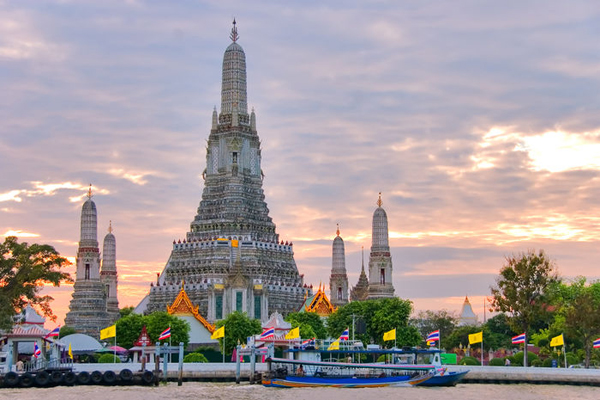 Being one of the most familiar sites in Thailand and best known temples in Bangkok, Wat Arun is actually fully titled Wat Arun Ratchawararam Ratchawaramahawihan, which is a bit of a mouthful. It’s often known by the simpler title of the Temple of Dawn. Its soaring golden tower is a spectacular sight at any time of day but is especially impressive when the sun is setting on the horizon. Wat Arun is situated opposite to the Grand Palace, across the Chao Phraya River. You can easily catch a boat from Sapphan Taksin boat pier which will take you to pier 8. From there you can take a shuttle boat to get you across the river. There’s an array of beautiful architecture to see at Wat Arun, so it’s a good idea to allow yourself at least an hour for a visit to this site. The Wat Arun is located in Wang Doem road, Bangkok.

Wat Pho is located in Sanamchai road, Grand Palace Subdistrict, Bangkok, opposite Wat Arun on the other side of the river, which you can cross on a shuttle boat for 3 baht. The main attractions at Wat Pho are the 15m tall reclining golden Buddha and the collection of historic Buddha images. The temple is the home of the Thai Traditional Massage School; a number of massages are available for visitors from 260 baht for 30 minutes. There are no bookings available as it operates on a first come first served basis so it is best to get there early.

4. Vimanmek Mansion Museum
Vimanmek Mansion, a former Royal retreat is the largest piece of teak architecture in the world, and the home of King Chulalongkorn’s European treasures which he collected on his travels. The mansion has 3 storeys and 81 rooms which all follow a set colour scheme. A must see during a visit to Bangkok. In the grounds of the Vimanmek Masion there are a number of halls and a pavilion which are open to the public. These display collections of ceremonial art, pottery, textiles, and historic timepieces many of which were sourced by Thai Royalty.

The Cho Phraya River meanders its way right through the heart of Bangkok and adds to the charm and appeal of this bustling metropolis. Getting out on the water offers a break from the crowds and the heat, making a trip along the river a popular thing to do in Bangkok. River ferries dart back and forth between hotels and landmarks so even if you just take a quick trip from one side to the other it’s a nice experience. The best way to see this Bangkok attraction though is on a river cruise or by renting a boat and travelling at your own speeds. Longboats can be rented from a couple of different piers and the price includes a driver so you don’t have to worry about finding your way around. Ask him to take you to the canals as this is a wonderful thing to do in Bangkok that many visitors to the city don’t get to see.There are guided river cruises as well if you want to learn all about the river while cruising on it. Dinner cruises are the perfect end to a day and allow you to see the city from a different perspective as the sun goes down and the temples and palaces are lit up. 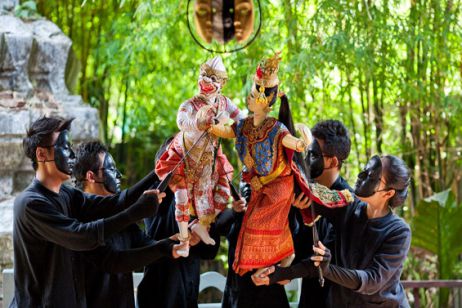 7 free-activity on the trip to Bangkok