Along Chao Phraya river, 20km to the north of Bangkok is Nonthaburi which is one of central province in Thailand. It is the most densely populated province after Bangkok. This place is known for a lot of fruit gardens, historical temples and pagodas (Wat), and tourist attractions as well. 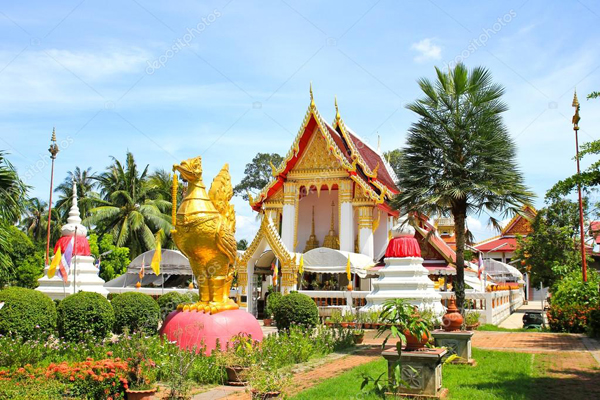 Nonthaburi was declared a city in the middle of the 16th century, which was previously a village named Talat Khwan. During the reign of King Prasat Thong, a canal was dug to create a shortcut for the flow of the Chao Phraya. The river changed its flow into the new canal, which is still the riverbed today. In 1665 King Narai built a fortress, as the shorter river course was giving enemies an easier route to the capital, Ayutthaya. The town was then also moved near the fortress.
From 1943 to 1946 the province was incorporated into Bangkok.

Nonthaburi is directly northwest of Bangkok on the Chao Phraya River. The province is part of the greater Bangkok Metropolitan Area. In most parts it is as urbanized as the capital, and the boundary between the two provinces is nearly unrecognisable.

The climate in Thailand is typically tropical; rainy, warm, cloudy southwest monsoon (mid-May to September); dry, cool northeast monsoon (November to mid-March); southern isthmus always hot and humid. The terrain: central plain; Khorat Plateau in the east; mountains elsewhere. For Bangkok in January the daily average maximum temperatures is 33°C with the average minimum 23°C, while in June the average maximum is 34°C with a minimum of 26°C. The wettest month for Bangkok is September with an average of 308.3mm of precipitation falling while the driest month is December with 9.9mm falling.

Tuk -tuk: The popular and favourite type of transport in Thailand due to its convenience to go around the city and other areas.

Bus: Bus to go around the city and to other provinces are always available.

- Kanchanaphisek Park: This public park is located beyond Wat Chaloem Phra Kiat. It covers an area of 40 acres. The park was built by the Treasury Department to mark the 50th anniversary of the accession to the throne of King Bhumibol Adulyadej and as a recreation spot for the public. The park has a fine collection of water plants, garden plants and underwater animals. The park is open daily from 6 a.m to 6 p.m.

- Wat Suan Kaeo: Wat Suan Kaeo is a Buddhism diffusion centre. An innovative monk named Phra Phisal Dhamma Phati or Phra Phayom Kanlayano has initiated several projects for the Suan Kaeo Foundation. The Foundation aims to upgrade living standards of the poor and to develop society. Successful projects include the Rom Pho Kaeo, the shelter for the elderly, the supermarket for the poor, and the Suan Kaeo nursery projects.

- Ko Kret: Ko Kret or Kret island in the Chao Phraya River was created from the digging of a canal around a cape of the Chao Phraya River. In 1722, during the reign of King Thaisa of Ayutthaya, the island was called Khlong Lat Kret Noi which means a shortcut to Kret canal. Later, the current diverted, making the canal larger and turning the cape there into an island. Ko Kret has prospered since the Ayutthaya period as evident from the many temples on the island that are from that period. However, it may have been deserted when the Burmese sacked Ayutthaya. When Ayutthaya was reclaimed, King Taksin the Great relocated the Mon people who found religion here. The Mon people on the island came during the Thon Buri period and during the reign of King Rama II. A bicycle is the best transportation mode on the island.

- Wat Poramai Yikawat Museum: The museum is built in Mon ethnic minority's style in Ko Kret, prominently are marble reclining Buddha curving in Mon style and chapels with sophisticated decoration. The Wat opens at 9 a.m to 4 p.m from Monday to Friday, and 9 a.m to 5 p.m on Saturday and Sunday.

In case you love finding out festivals, it is not wrong on choosing Nonthaburi. Every year, there are a lot of festivals together with dozens activities for you to join such as: Nonthaburi, Wan Lai Festival. Ngan Bun Klang Ban and Phanat Nikhom Basketwork, Chonburi Buffalo Race, etc.