Bun rieu is one of the lesser-known noodle soups in Vietnamese cuisine, perhaps due to its rather unappealing hodge-podge, thrown-together appearance. However, each part of the soup complements the whole and definitely makes it one of the must tries on Saigon’s streets.

While there are several varieties to choose from, the broth is always the same. Bun rieu is one of the few Vietnamese soups that’s tomato based; it’s also flavoured with crab that is pounded with the shell and then strained in a sieve so no crunchy bits make it in the soup. It can be freshwater or seawater crab depending on where you find the vendor. In Saigon, it’s mainly brown paddy crab. Complementing the crab flavour may be a combination of ingredients, but you will mainly find fish sauce, shrimp paste, annatto seeds and fresh lime. The broth is then left to simmer for a few hours to really intensify the flavour of the pounded crab.

Bun rieu is almost always served with a crab dumpling. This is the meat from the crab and usually includes dried shrimp, shrimp paste, a healthy dose of pepper and fish sauce. Some vendors will place this mixture in a metal container to steam while others will make small dumplings and place it directly in the broth. These usually have egg to bind everything.

The assembly of the soup is simple. Throw some rice vermicelli noodles in the bottom of the bowl and pour in the broth, making sure to get some tomatoes and crab dumplings. After this, it’s anyone’s game. Many vendors will add dau hu chien (fried tofu), oc (snail), cha ca (fried fish cake) or huyet (congealed pig blood). A sprinkling of chopped scallions finishes out the preparation. While the blood cake can sound a bit off-putting, the iron-tinged taste complements the subtle tomato broth, even more so if you squeeze some fresh lime to it.

Typical of Vietnamese food, a bevy of garnishes will be laid out so you can personalise your bun rieu experience. Shredded banana flower, split rau muong (water spinach), fresh lime, mint and leaf lettuce are all brought along with the soup. If your taste buds can handle it, ask for a side of mam tom, the purplish-coloured shrimp paste to dip your crab in. Bun rieu afficianados can’t live without the stuff but just be aware that this may be an acquired taste.

Since crab is a bit more expensive to procure than other meats, the price of bun rieu can be on the higher side. Most vendors charge from 30,000 VND and up, depending on the types of additions. We recommend the stall just down the road from the Lunch Lady in District 1 (at 37 Hoang Sa). She makes some mean cua dumplings and offers every single variation of bun rieu under the sun. 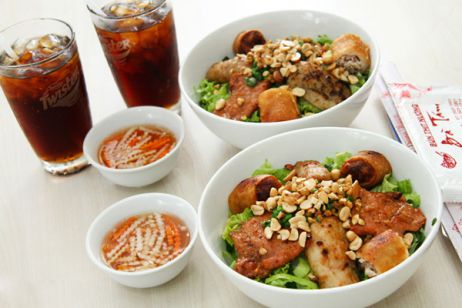